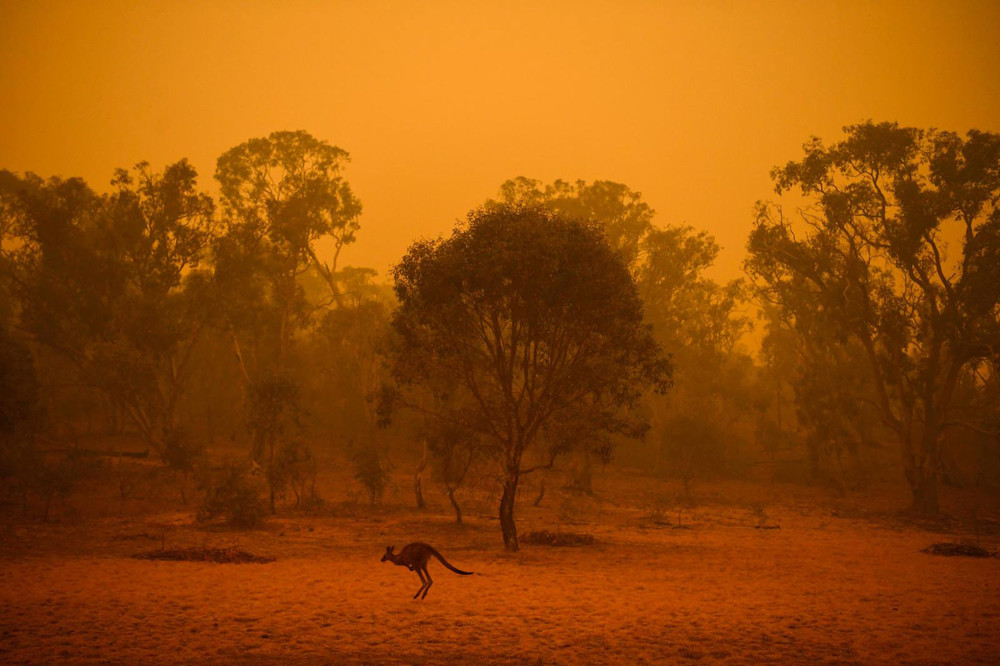 Since September, bush fires have been burning in Australia. Drought and a heat wave are feeding the flames. Officials say this fire season is one of the worst in the country’s history.

“We have no idea where this is going to end,” David Bowman says. He’s a scientist at the University of Tasmania. “Australia’s vegetation is highly flammable. The fire [is] not going to run out of fuel.”

Wildfire has burned about 17 million acres so far. That’s more than twice the size of the state of Maryland. At least 25 people have died. Thousands have been evacuated.

Aid has poured in from around the world. New Zealand, Canada, and the United States have sent firefighters and other helpers. Australia’s military is delivering food and water to affected towns. 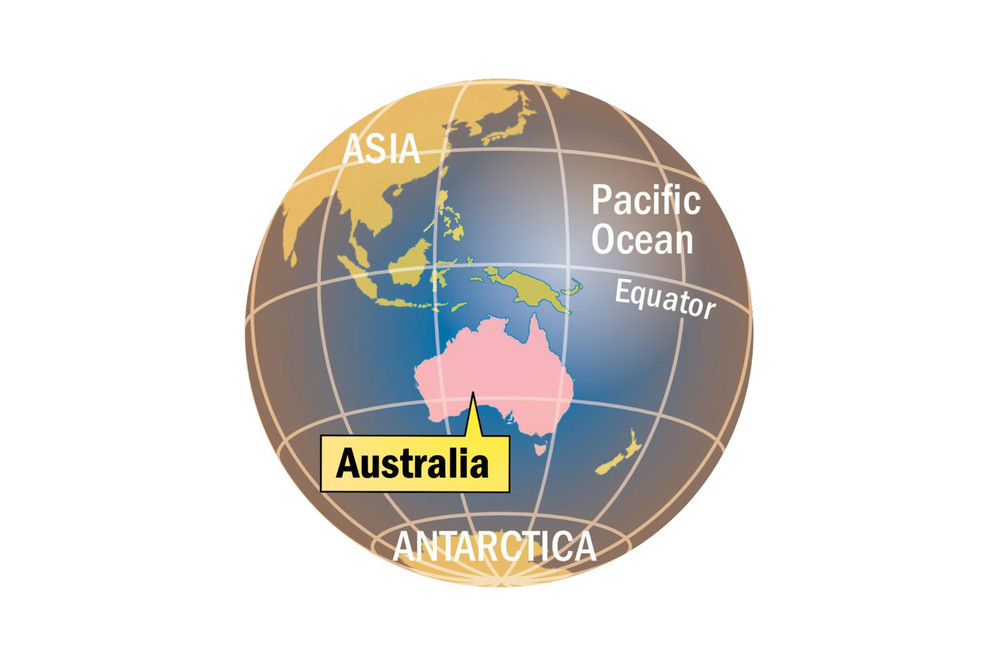 Australia is a major producer of greenhouse gases. They are a cause of climate change. Hot, dry weather makes wildfires worse. Critics say Morrison is not doing enough to fight climate change. Morrison says his government is “meeting and beating” its targets. He also argues that climate change is just one of “many other factors” causing the fires.

The bush fires have had a big impact on wildlife. Areas where species such as the koala live are being wiped out. Animal-rescue teams have landed on Kangaroo Island, in South Australia. Heidi Groffen is an ecologist. She thinks some mouselike dunnarts there may have found safety in rock crevices. “We’re hoping to bring some into captivity before they are completely gone,” Groffen says.

by TIME for Kids 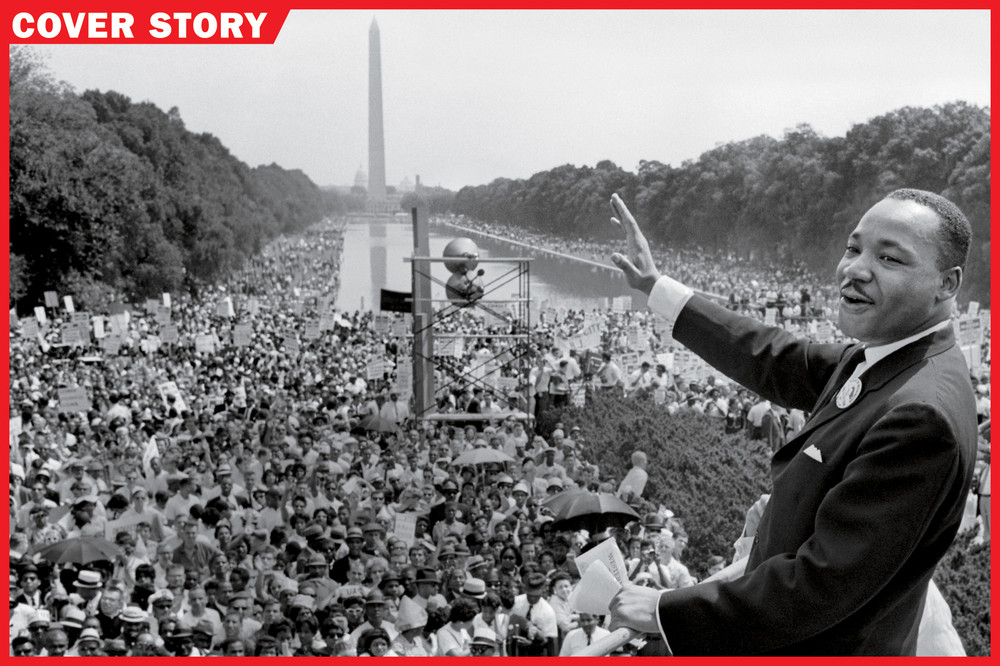 On August 28, 1963, people poured into Washington, D.C. Many held signs: “We March for Integrated Schools Now!” and “We Demand Jobs for All Now!”

The event was called the March on Washington for Jobs and Freedom. It drew about 250,000 people. They were calling on the United States government to pass laws guaranteeing equal rights for all Americans. At the Lincoln Memorial, they heard Martin Luther King Jr. give one of the most important speeches in our nation’s history.

The Life of a Leader

King was born in Atlanta, Georgia, in 1929. He became a minister and moved to Montgomery, Alabama. He preached often about his dream of equality for all. But in the 1950s, segregation was a fact of life in many parts of the country, especially in the South.

In 1955, an African-American teenager named Claudette Colvin was arrested in Montgomery, Alabama. She had refused to give up her seat on a bus to a white person. Rosa Parks was arrested soon after for a similar act of protest. This led to a yearlong boycott of public buses in Montgomery. It also led to a U.S. Supreme Court decision that banned segregated seating on buses.

In April 1963, King helped lead a protest in Birmingham, Alabama. He was arrested and jailed. That only motivated him. A few months later, he joined other civil rights leaders for the March on Washington. It was organized by Bayard Rustin and A. Philip Randolph. Many leaders spoke before King. His speech lasted 18 minutes.

“I have a dream,” he said, “that one day this nation will rise up, live out the true meaning of its creed: ‘We hold these truths to be self-evident, that all men are created equal,’” King said toward the end. “I have a dream that my four little children will one day live in a nation where they will not be judged by the color of their skin but by the content of their character.”

“He was preaching from his heart,” says John Lewis. He is now a U.S. congressman in Georgia.

The Dream Lives On

The March on Washington showed Americans the power of peaceful protest. The following year, President Lyndon B. Johnson signed the Civil Rights Act. It banned discrimination.

Maxine Allen Johnson Wood took part in the March on Washington. She had just graduated from college. She says King’s dream is still important today. “The image that he gave was [of] a future. And it wasn’t beyond our reality to think that [it] could happen.”

King’s words continue to inspire people around the world. “Of all the gifts [he gave us], the greatest has been the belief in society’s ability to change and the power each of us has to effect that change,” Lewis says.

Fish with fingers missing link in evolution of human hand 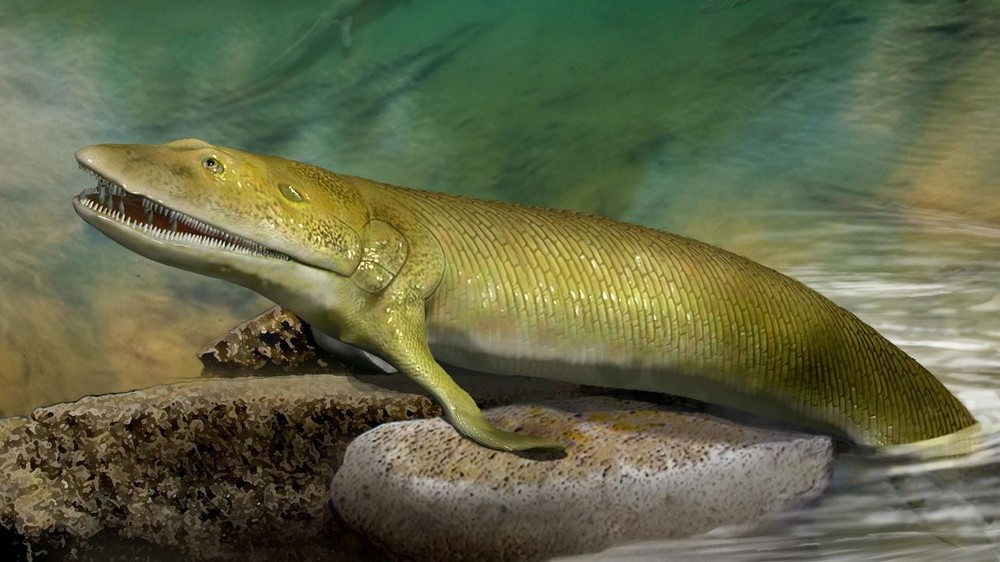 A fish with fingers that lurked in lagoons 380 millions years ago could teach us about the origins of the human hand. The 1.6m-long, shark-like Elpistostege watsoni was a slippery predator that lived in what is now eastern Canada.

Australian and Canadian scientists studying a fossil of the fish say its fin has similarities with the human hand, with the skeleton featuring an arm, a forearm and finger-like parts. Researchers say their findings reveal “extraordinary new information” about how the human hand evolved.

Professor John Long, of Flinders University, South Australia, said: “This is the first time that we have unequivocally* discovered fingers locked in a fin with fin-rays in any known fish.

“The articulating* digits in the fin are like the finger bones found in the hands of most animals.

“This finding pushes back the origin of digits in vertebrates to the fish level, and tells us that the patterning for the vertebrate hand was first developed deep in evolution, just before fishes left the water.”

Evidence of Elpistostege was first found in 1938 in the cliffs of Miguasha National Park in Quebec, Canada. It was only in 2010 a complete specimen was discovered.

The unique predator is believed to have lived in a shallow, tropical marine habitat with brackish* water in the Quebec region during the Middle and Upper Devonian period, about 393-359 million years ago.

Researchers believe fish such as Elpistostege are “transitional fossils” which could help understand how vertebrates, or backboned animals, were able to transition from water to land.

Palaeontologists* from Australia and Canada used high-energy CT scans to study the pectoral* fin, used to control the direction of movement.

The fin skeleton revealed the presence of an arm (humerus), a forearm (radius and ulna), a wrist (rows of carpus) and fingers (phalanges organised in digits).

Lead author, palaeontologist Dr Richard Cloutier, of the University of Quebec, Canada said humans come from a long line of evolution and “that every part of our body, like our fingers, has a long evolutionary history”. “This is true for Homo sapiens but it is also true for all living organisms,” Dr Cloutier added.

This marks the first time such traits have been found in a fish rather than in the earliest amphibians – the first land vertebrates – that later evolved from fish with sturdy fins like Elpistostege. It had two explicit* digits and three other apparent* digits.

“The origin of digits relates to developing the capability for the fish to support its weight in shallow water or for short trips out on land.”

He said the increased number of small bones in the fin created more flexibility to spread the fish’s weight out on dry land when not supported by the buoyancy of water.

The research was published in the journal Nature.